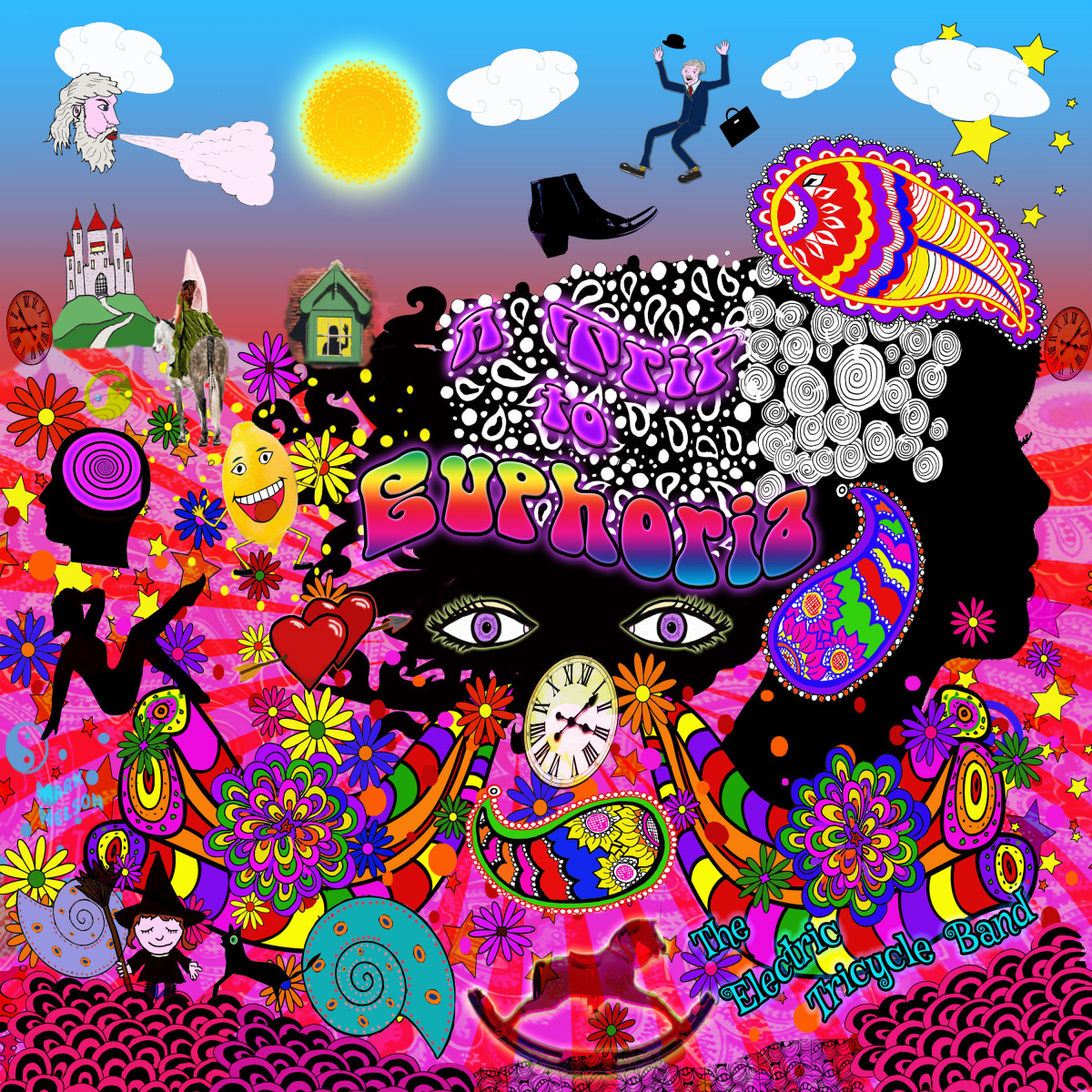 Above are a selection of songs from a ‘rediscovered’ classic Psychedelic album from 1968 by the Electric Tricycle Band which has just been re-released after being forgotten for over 50 years! ‘A Trip to Euphoria’ – a wonderful double album of 60’s psyche has been issued once more by Blue Trouser Records. So, what has this to do with Mark Nelson?…..Listen and see…..

It’s available as a digital download on: Amazon, iTunes and Spotify etc (link buttons over there >>>)

THE STORY BEHIND “A TRIP TO EUPHORIA”:

The story goes…. it was 1967, England, and the pop charts in the UK were already full of strange and exotic sounds, song titles and some strange sounding band names as well. Procol Harum, a case in point, had just been at Number 1 for six weeks and The Beatles had broken the mould again a few months earlier with their tremendous ‘Sgt Pepper’ LP. Love, flowers, peace and heady incense aromas were in the air and Swinging London was in full swing. A young band of musicians from Surrey were planning on recording their next album ‘A Trip to Euphoria’ which they hoped would be a ‘winner’; the making of them.

The Electric Tricycle Band, formerly known as the Flaming Rockets, were: Mark Nelson – lead singer, guitarist, keyboards and flute, his brother Dave Nelson – lead guitarist and vocals, Brian ‘Nunky’ Clarke on bass and vocals and Simon ‘Snorkelman’ Mason on drums. The band were embarking on their third album and a change of direction to match their trendier band name. Where once song-writing brothers Mark and Dave Nelson wrote simple compositions about girls, bikes and dancing, they were now exploring more surreal tales about a witch’s daughter, a maiden’s rejection from days of yore, time and other dimensions, the fickleness of fashion, a strange lemonade man full of fizzy pop, pretty flowers exploding everywhere, a Trip to the seaside, a strange girl who just stared from her window, a God-like control freak, a girl with strange, mesmerising lavender eyes as well as a magical rocking horse that takes you on a trip to another dimension.

Out went the straight-forward ‘Beat’ pop mixes of 1966, to be replaced by ostentatious productions of colourful, layered tracks with a richer, rockier sound, backwards guitars, harpsichords and flutes, soaring solos, exotic instruments from the far East, complex vocal arrangements and anything the band could get their hands on to play and hit in the studio. It took almost six months of intense writing and recording and the last of the band’s money, earned from their UK tour the previous year. Wives and sisters helped with backing vocals and the psychedelic artwork. A single ‘Pretty Flowers/Soft Explosion’ was recorded to promote the forthcoming album and was rushed out onto the market. A highly catchy song it should have been a hit, but with inadequate backing and little promotion it didn’t even dent the Top 40 charts.

Finally, in January 1968, ‘A Trip to Euphoria’ was finished, mixed, packaged and ready to hit the world as a double album. This was their moment, an album they were so proud of, an album to rival ‘Sgt Pepper’ perhaps, an LP to rocket them to stardom, possibly; but it wasn’t meant to be. Zentangle Records, their small London label, who had already let the band down over their single, had no financial means to release the album unfortunately and were waiting on sales to come in from previous label releases. A double album was a rare and expensive beast at that time, but the label’s delay in considering a release date meant the band just kept on recording until their money ran out. Consequently, the album got longer and longer until they had nearly 20 songs recorded, all of which the band wanted included on their new album.

Their innovative producer Brian ‘Buttons’ Bennett suggested making it a double album; Dylan had done that the year before with his ‘Blonde on Blonde’ LP. The band members all agreed and were insistent that Zentangle release it as a four sider. 1967 turned into 1968 and with recordings finishing in January it wasn’t until four months later, in April 1968, that the label finally agreed to release the album. By mid ’68 though, Psychedelia was no longer ‘de rigeur’, it was passé and many talented bands fell foul to the lightning trend changes in pop music at this time, having to wait in the wings to be heard, only to find when their moment finally came, the audience had gone home. 1968 was a turbulent year in both music and politics and hard rock was in, soft pop of the flowery kind was out, if you wanted to be taken seriously, that is.

The album consequently sold very little, might it have been more successful as a single LP? Perhaps, but Zentangle Records did little to promote the album; and by 1969 the company had folded due to money issues. The Electric Tricycle Band were broke and devastated that all their efforts had fallen on deaf ears but they soldiered on recording several further albums until finally going their separate ways in mid 1970.

Their masterpiece album was destined for obscurity, it seemed.

That was, until 2016, when Zenith 69 Records were putting together forgotten psychedelic compilations out on budget CDs and included a lost recording of the band’s ‘Pretty Flowers/Soft Explosion’ single originally broadcast on Sunlight Radio – an independent Surrey radio station back in 1967. The compilation series was a huge success and interest in the band grew. So much so, that in 2019, Zenith 69 re-mastered the entire album, together with the forgotten recording of the single, and re-released it on a single CD.

Listening to this collection you can hear the band developing from psychedelic pop to a heavier, rockier sound as the project moved on. Starting off in late summer ’67 were tracks like ‘Eighth Dimension’, ‘The Trip’, ‘Dislocation’ ‘Lemonade Man’ and ‘Rocking Horse’ (sure nods to Pink Floyd’s Syd Barrett), running through to winter ‘67/ ’68 when they recorded ‘the heavier, darker songs ‘Love Reaction’, ‘Jennifer Lightly’, Man in the Sky’, ‘Mr Intolerant’, ‘Tale of Elenore’ and ‘Norah’.

“Zentangle really let us down”, Mark once told ‘Record Mirror’ back in 1970, “if they had just shown us a bit more faith and promoted the record, who knows what ‘ETB’ could’ve become!” If, indeed…….

Or so the story goes, perhaps it is just that, a story….for rumour has it that it was UK singer-songwriter, Mark Nelson, who actually put together this pseudo 1967 psychedelic album under the guise of the Tricycle Band, through his love for 60’s psychedelic music, trying to stay as close to that period’s production sound.

Maybe. Whichever story you choose to follow, this is an album of quirky late ‘60’s psyche-pop where almost every track of the album leaps out and smiles at you. Take a listen. Just let your imagination run wild and your mind be expanded by a Trip to Euphoria!

You can be the first one to leave a comment.